In park environment, in an area of 40 decares, are displayed more than 241 models of artillery armaments, armor vehicles, engineer property, aircrafts, naval armaments and missiles. Four-pound guns, M 1867, and 9-pound guns, M 1867, present the field artillery, which has taken part in the Russo-Turkish war of 1877-1878, as well as 6-inch mortar, M 1864 and 8-inch mortar, M 1867 present the siege artillery.

The central place is occupied by the only preserved up to the present ballistic missiles “SKUD”, ”FROG” and “SS-23”, as well as SA-75M “Dvina” and “KRUG” missile complexes.

Displayed are various models of armored vehicles and units, which have been in service in the Bulgarian Army during different periods – “Hotchkiss” and “Skoda” light tanks, as well as “Meibach” T-4 main battle tank and the Russian T-34, T-55AM2 and T-72. In the outdoor exposition are presented specimens like BTR-60PB, MTLB, BMP-30, etc. 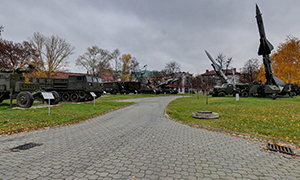 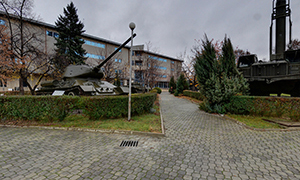 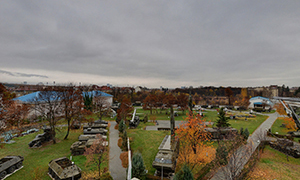